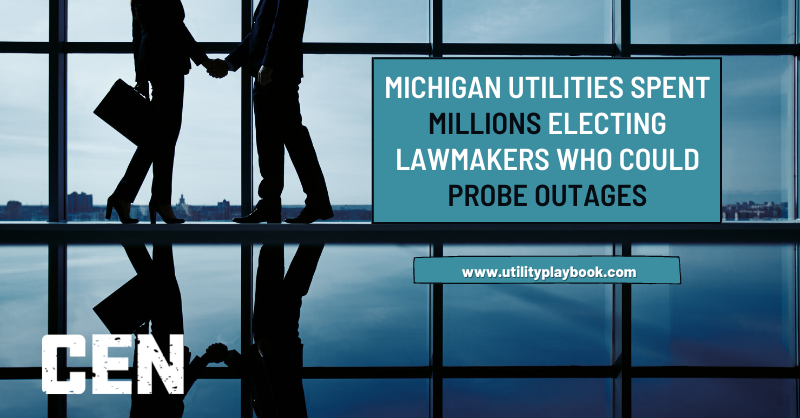 Lansing — Michigan officeholders who are poised to investigate a wave of outages this month that spurred 1 million customers to lose power have benefited from $55 million in “political” and “civic” spending over the last five years by the state’s top utilities.

Pictured are some of the ads the nonprofit Citizens for Energizing Michigan’s Economy has run promoting or criticizing members of the state Legislature.

That question could gain the spotlight in the coming weeks amid frustrations and concerns from some lawmakers about widespread power outages Aug. 10-12. Nearly 1 million customers lost power, many for multiple days, in what’s been described as the most significant outage in four years.

Allison contended lawmakers have maintained a “cozy” relationship with the utilities as Michigan has had the most expensive average residential electricity rates in the Midwest, according to a 2020 report. It also had the most average power interruptions in the region, according to data from 2019 compiled by the Energy Information Administration

Tracking the political efforts of DTE and CMS is difficult because the companies’ leaders have often used nonprofit organizations that don’t have to disclose the sources of their money. In annual filings with the Michigan Public Service Commission, the two utilities have reported a total of $55 million in political, civic and related spending from 2017 through 2020.

From 2017 through 2019 — 2020 reports aren’t available yet — nonprofit organizations that either have been funded by the utilities or have utility executives on their boards have spent at least $12 million on television ads touting candidates, contributions to the state’s political parties, giving to organizations tied to officeholders or donations to groups that got involved in promoting state candidates.

In 2019, for example, the nonprofit Michigan Energy First, which features three DTE officials on its board, gave $250,000 to a Michigan Democratic Party account; $650,000 to a Michigan Republican Party account; $100,000 to Progressive Advocacy Trust, which has previously supported Gov. Gretchen Whitmer; and $20,000 to Moving Northern Michigan Forward, an organization with a board that features Republican House Speaker Jason Wentworth’s wife and one of his staff members.

Asked about the contribution, Wentworth, R-Farwell, said the House is setting up meetings with major utilities on this summer’s outages to “find out what we can do to make sure this doesn’t happen again.”

“In the meantime, we are working every day to help local residents who have been affected by the storms find the resources and information they need,” the speaker said.

For its part, DTE supports public policies that promote its commitment to sustainable, reliable, affordable and safe energy, said spokesman Peter Ternes. Its contributions to trade and business associations and political organizations allow DTE to participate in energy industry discussions for best practices, regulatory standards and a wide range of other relevant activities, including policies that help local communities prosper through economic growth and jobs development, he said.

“As an energy company, we are affected each day by the decisions of federal, state and local officials,” Ternes said. “None of DTE’s expenses towards lobbying, political contributions and memberships, reported annually to the Michigan Public Service Commission, are included in rates charged to customers.”

Likewise, Consumers’ customers “do not pay for any contributions” to politically focused nonprofit organizations “or for any other political activity for that matter,” said Katie Carey, spokeswoman for CMS Energy.

“We are engaged in the political process, supporting pragmatic policies that are focused on safe, reliable and affordable energy for Michigan,” Carey said.

‘Hold their feet to the fire’

In addition to the corporate giving, the two utilities’ employees and executives fund political action committees that have contributed nearly $2 million directly to current state officeholders and their caucuses over the last five years.

About 96% of the state Legislature — 140 out of the 146 current lawmakers — have accepted a contribution from at least one of the utilities’ PACs, according to a Detroit News analysis of campaign finance disclosures.

In the last five years, Whitmer’s committees have received about $66,000 in contributions from the PACs of DTE and Consumers. Senate Energy Chairman Dan Lauwers, R-Brockway, has received $50,000. And House Energy Chairman Joe Bellino, R-Monroe, has garnered $34,170.

In an interview, Bellino said he was among the 1 million electricity customers who lost power in Michigan after severe storms hit the state. The lawmaker said his home’s electricity was off for four days.

Michigan House Energy Committee Chairman Joe Bellino, R-Monroe, has received $34,170 from the political action committee of DTE Energy and CMS Energy. But he said he wants to get to the bottom of the recent power outages. Bellino said he lost power for four days.

He plans to hold a hearing on the outages after the Legislature returns from summer break. Bellino said he wants to find out what happened. While he called DTE and CMS good companies, he dismissed the idea that lawmakers whose campaigns have been funded by the utilities can’t hold them accountable.

“As a representative, as the chairman of the energy committee, I am going to hold their feet to the fire,” Bellino said.

Brann said he wasn’t sure why the utilities hadn’t contributed to his campaigns, but he acknowledged that he wants to see more independent energy offered in the state. Michigan has a cap on customers’ ability to purchase electricity from alternative suppliers, other than the dominant utility in an area. CMS and DTE have aggressively fought efforts to lift or increase the cap, which is currently 10% of the incumbent utility’s retail sales.

Asked if he believes the Legislature should probe this summer’s power outages, Brann replied, “I’d think it would be worth looking into. Especially in this hot weather, it can be a dangerous situation.”

One of the areas that was hardest hit by the August weather was southern Michigan’s Hillsdale County. It was one of three counties for which Whitmer declared a state of emergency on Tuesday.

A year earlier, the county’s state House primary race saw a storm of spending on mailers and advertisements by Citizens for Energizing Michigan’s Economy, a nonprofit group that’s been funded by CMS Energy. In a 2017 filing with the Michigan Public Service Commission, Consumers reported giving $20 million to the nonprofit.

A filing with the Michigan Public Service Commission for Consumers Energy reports a $20 million contribution in 2017 to the nonprofit Citizens for Energizing Michigan’s Economy.

In Hillsdale County, the nonprofit’s efforts promoted Republican Andrew Fink of Hillsdale, who was in a competitive race in the GOP-dominated district. The group ran TV ads on Fox News and sent out at least a dozen mailers, said Adam Stockford, one of Fink’s primary opponents and the mayor of Hillsdale.

Stockford estimated that Citizens for Energizing Michigan’s Economy spent between $350,000 and $500,000 to help Fink, who ended up winning the race and now serves in the Michigan House. Stockford argued the group got involved because some of Fink’s opponents, including himself, favored deregulating the state’s electricity market.

“My experience with Consumers is they’re a monopoly in Michigan,” Stockford said. “And they will spend or do anything to keep that monopoly.”

Fink is now considered to be one of the top contenders to lead the House GOP caucus next term. In a statement, he said his area had been hit hard by one strong storm after another. Many people were still without power and trying to get their lives back to normal, he said Thursday.

“In the next couple of weeks, I plan to meet with the utilities and discuss ways we can improve the system and prevent something like this from happening again,” Fink said. “The people who were impacted by this deserve to know what happened and why it happened, and I’m going to make sure they do.”

Because Citizens for Energizing Michigan’s Economy is a nonprofit entity and its ads didn’t expressly tell people to vote for Fink, the group will never have to disclose how much it spent on the House race or any other under the state’s campaign finance laws.

According to Facebook’s political ad archive, the organization ran ads promoting five state House candidates in primary races in 2020. They all won and are serving in the Michigan House.

CMS Energy spokeswoman Carey said any past contributions to Citizens for Energizing Michigan’s Economy “came from the company in the form of non-customer, shareholder dollars.”

On whether Michigan residents should be concerned about the company’s political giving, she replied, “CMS Energy Corporation and its subsidiaries, including Consumers Energy, engage in advocacy through regular, constructive and transparent interactions with government officials, policymakers and stakeholder groups.

“Policy decisions of lawmakers and regulators at the federal, state and local levels can significantly impact the business environment in which we operate, especially because our core utility business is highly regulated.”

In the 2018 election, Citizens for Energizing Michigan’s Economy and Michigan Energy First were more aggressive in their political efforts.

Citizens for Energizing Michigan’s Economy spent about $900,000 on TV ads promoting candidates for state offices in 2018, according to tracking by the Michigan Campaign Finance Network.

The group also gave $5.4 million to a group called Faithful Conservatives for Michigan, which led a campaign against former state Rep. Gary Glenn, a Republican from the Midland area, who was running for the state Senate and had been one of the utility’s most vocal critics in the Legislature.

During a May 2018 committee hearing, Glenn compared Consumers Energy to “terrorists” he’d like to “shoot.” After the spending in his race, Glenn lost his Senate campaign to Kevin Daley, R-Lum, by 17 percentage points in the August 2018 primary. Daley now serves in the state Senate.

One of the few lawmakers who survived opposition spending from groups tied to the utilities in recent years is state Sen. Tom Barrett, R-Charlotte, who has criticized the companies’ protected status in state law.

On Thursday, Barrett said the Legislature and the Michigan Public Service Commission should “absolutely hold oversight hearings” on this summer’s power outages.

“The utilities in Michigan are granted unique privilege to operate without competition,” Barrett said. “Therefore, utility customers should expect strict oversight and review of their operations and procedures.”

The Public Service Commission is the state panel primarily in charge of regulating the utilities. Its three members were appointed by Whitmer. On Wednesday, the group ordered the utilities to provide more information about what had occurred and how they plan to combat future outages.

“The fact of the commission’s existence, the fact that we’re an independent agency in state government, that we’ve got pretty significant powers under statute, allows us to sort of serve as a check on all of that,” Scripps said. “It just means that we’ve got a job to do.”