Just over one year ago, Ohioans were shocked when the FBI arrested five people on a $61 million federal racketeering scheme in what has become known as the largest bribery scandal in Ohio history. Those arrested included then-House Speaker Larry Householder (R-Glenford), former Ohio Republican Party Chair and lobbyist Matt Borges, lobbyists Neil Clark and Juan Cespedes, and Householder operative Jeff Longstreth. The unraveling of the scandal continues and recently led to the resignation of Ohio Public Utilities Commission Chairman Sam Randazzo. Furthermore, FirstEnergy Corporation has entered into a deferred prosecution agreement, making any Monopoly player think twice about investing in Boardwalk or Park Place when the power and money clearly lie with the Utilities.

At the center of the corruption is House Bill 6, legislation that became Ohio law in October of 2019. The bill included a $1.3 billion bailout for two nuclear power plants operated at the time by FirstEnergy Solutions (now Energy Harbor), a wholly-owned subsidiary of Akron-based FirstEnergy Corp. It also created a decoupling provision that essentially guaranteed FirstEnergy’s three Ohio utilities an annual revenue equal to what they earned in 2018, one of their highest revenue years on record thanks to hot temperatures and a number of other factors.

Now that a year has passed, you might wonder what progress has been made to rescind this disastrous law? The Ohio Conservative Energy Forum has worked hard to promote corrective measures and we would love to say that Ohio has taken monumental steps to reform monopoly utilities and prevent the use of dark money in campaigns so this abuse of power doesn’t happen again. Unfortunately, while some headway has been made, a great deal of work remains.

The most egregious portions of HB 6 are no longer law. To date, the nuclear generation fund and the decoupling mechanism have been repealed through House Bill 128, which also modified the Significantly Excessive Earnings Test (SEET) to ensure fair rates for utility customers. Other pieces of legislation have been introduced to repeal the OVEC Cost Recovery and to extend the Renewable Portfolio Standards in HB 6 into perpetuity, instead of ending them in 2026.

One year and one day after the first series of FBI arrests, the acting U.S. Attorney for the Southern District of Ohio announced that FirstEnergy, the utility company behind the scandal, had entered into a deferred prosecution agreement. The company was charged with bribing then-House Speaker Larry Householder and former Public Utilities Commission Chair Sam Randazzo, who resigned after FBI agents raided his home.

FirstEnergy disclosed in an SEC filing that it paid $4 million to end a consulting agreement with a company associated with an individual who went on to become a state regulatory official. FirstEnergy was also reported to be looking for a deal with prosecutors after firing six of its senior executives.

As part of the deferred prosecution agreement, FirstEnergy must pay a total of $230 million dollars. While this represents one of the DOJ’s largest criminal penalties in history, it’s chump change when compared to the $10 billion the company has received from Ohio ratepayers since 2010. Uncle Sam will get $115 million and Ohio Development Services Agency’s PIP Plus program will get the other $115 million. Outrageously, PIP Plus helps customers pay their utility bills, so FirstEnergy will get some of its own money back from customers who need assistance in paying their electric bills. The company continues to face four other inquiries from the PUCO (now under a new chair), along with investigations from the Federal Energy Regulatory Commission and the U.S. Securities and Exchange Commission – in addition to a myriad of shareholder lawsuits.

As the investigations and court cases continue, we hope that the many levels of this scandal will be thoroughly exposed and that Ohioans will increasingly demand stronger utility reforms. The Ohio Conservative Energy Forum will continue to advocate for reforms that establish more transparency, competition and consumer choice. Our energy industry has the potential to create jobs and spur a robust, competitive generation marketplace that benefits individual ratepayers and businesses, while unleashing the power of innovation to modernize our grid. We can no longer allow corrupt utilities to stand in its way.

When Monopoly Utilities Stifle Innovation their Customers Pay the Price 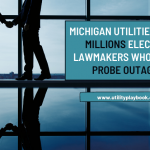